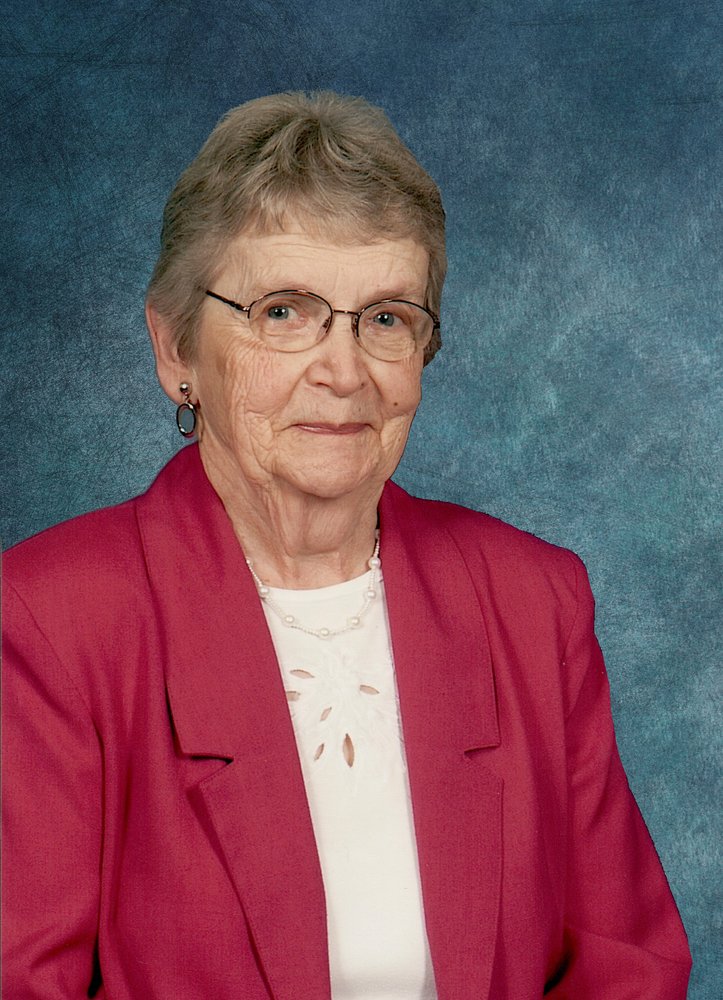 Ada D. Ehli, age 94, peacefully went to be with her Lord and Savior on July 7, 2019 following a brief illness.

Ada was born July 1, 1925 on the family farm near Lidgerwood, North Dakota to John and Edna Hruza. She was the oldest of 4 daughters.

After high school Ada obtained her teaching certificate from the Valley City State Teachers College (now known as Valley City State University) in Valley City, North Dakota. She returned to Lidgerwood to begin her teaching career in a 1 room schoolhouse teaching 1st through 8th grades. As the school was within walking distance of the family farm Ada lived with her parents and her siblings. Among the students in her classroom were her 2 youngest sisters which made for some interesting family dynamics between school and home.

Ada married Al Ehli in 1946 in Lidgerwood after Al’s service in the U.S. Army Air Force during WWII and they then began their family in Wahpeton, North Dakota.

In June of 1955, Al, Ada and their sons, Colin, Cal and Curt came out to Tacoma, Washington to attend the wedding of one of Al’s brothers. Having gone through a very bad winter in North Dakota and with the prospect of another hot and humid summer back there, Al and Ada decided the weather in western Washington was much milder than back home. After their two week vacation they returned to Wahpeton, sold Al’s business along with their house and furnishings and returned to Tacoma one month later. Most of the family's subsequent summer vacations were spent exploring every known route to and from North Dakota to visit Ada's family, all of whom still lived there. Ada often mentioned how hard it was to leave her entire family behind to move out west.

In 1960 Ada returned to teaching and taught at Visitation Catholic School (now Visitation STEM Academy) for over 20 years. Along the way she obtained her Bachelors Degree in Education from the University of Puget Sound in 1973.

After Al retired for the second time in 1985 they spent the next 16 years as snow birds in Arizona and California. They also enjoyed spending time at the cabin they had built near the Ashford entrance to Mt. Rainier National Park.

Ada and Al were very active at Visitation Parish from 1955 on involving themselves in everything from the Scouting program to major fund raising. Always proud of her Czech/Bohemian heritage, Ada was an 82 year member of the ZCBJ (Western Bohemian Fraternal Association) Lodges #283 in North Dakota and later, Lodge #181 in Seattle. Ada was also a 60 year member of YLI Institute #67, an organization of Catholic Women dedicated to the Christian principles of charity and love.

Ada was predeceased by Al, her husband of 70 years, and her sister Delores Froelich.  She is survived by sons Colin (Joyce), Cal (Randi) and Curt (Darla), 7 grandchildren, 8 great-grandchildren and sisters Jean Tesch and Donna Fluto.

The family would like to express their appreciation to the hospice team from Kaiser-Permanente and the caring staff of Peoples Retirement Community for the great care Ada received.

A Mass of Christian Burial will be celebrated at Visitation Catholic Church, 3314 South 58th Street, Tacoma, WA 98409 on Thursday, July 18th at 1:00 pm with a reception following.

Interment will be at Tahoma National Cemetery where Al is buried. Donations in Ada’s memory may be made to the Visitation STEM Academy, 3306 So 58th Street, Tacoma, WA 98409

To send flowers to the family or plant a tree in memory of Ada Ehli, please visit Tribute Store